Alex and the green machine 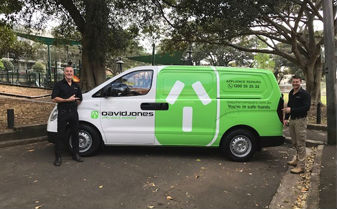 It’s hard to argue that some appliances were built for a good time rather than a long time and as such, the kindest thing is probably to recycle them once they’ve packed it in. However, if you buy with an eye for quality and longevity, and many of us do, then the sum of a brand’s reputation is built around the quality of its individual parts; parts that might, from time to time, despite their quality, require replacement due to wear and tear. It’s similar to a car, you wouldn’t replace it if it just needed a new fan belt.

Alex from David Jones – The Electrician reckons you should at least ask the question before rendering an appliance redundant. Alex spent years working with one of the world’s most recognisable brands so he is well placed to be heading David Jones – The Electrician new appliance repair division. Alex thinks that discarding rather than repairing is a mindset that needs to change.

“You get what you pay for and what people don’t understand is that when you pay more for a quality appliance then you’re buying into the sustainability of that appliance,” says Alex.

“I see it all the time, people thinking they need to get rid of something that just needs a new and often pretty inexpensive part,” he added.

As part of the service, when they make the call out, David Jones – The Electrician can give you both a quote to repair and the replacement cost for the model closest to the one you’re repairing.

We all claim to lament the transition to a disposable society, well David Jones – The Electrician are doing something about it. Be on the lookout for Alex and the Green Machine with the familiar DJE logo, now in green.